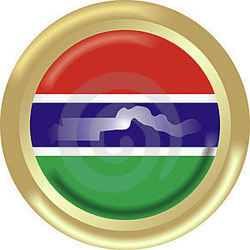 The Gambia (Smiling Coast of Africa)
West Africa:
Please see below..., there is The Gambia- Administrative map!

Surrunded by Senegal, with a 50 miles coast lines, this is Africa's smallest country. The Gambia river flanked by mangrooves & low hills, flow from East to West into North Atilantic Ocean.
Gambia's climate is tropical with two distinct wet and dry season.
Though Gambia is small it offers wide variety of places offering tourist excursions & attractions!

Weather
Although the months of heaviest rainfall are August and Sebtember,
we find that most rain occured at night and has not destracted from the enjoyment of your holiday. Nevertheless, a lightweight rain umbrella may be useful in these months.
Between January and May evenings and mornings can be cooler than people expect. For those planning to travel inland away from the coast  and the benefit of the sea breeze, it's important to note that temperatures during the summer can reach 42 degrees.The Gambia enjoy the virtually uninterrupted sunshine and high daytime temperatures with almost rainfall from November to June. From July to October the humidity level is high as the tropical sun will be puntuated by short but spectacular rain storms.

Languages & cultures
The Gambia is former Bristish colony and the official language is English but their are several tribal languages including Mandinka, Serahule, Fula, Jola, Wolof, etc.
The people of Gambia are friendly and hospitable and life is taken at a very relaxed place.
To accept this is essential, after all  you will be on holiday.
The most common Gambian dishes are Benechin (rice & vegetables) or
Domoda (meat, stewed in groundnut butter and served with rice).

Transportation
The is no railway and the only public transport are Buses & Taxes which cover the main route and some Bush roads, but do not run to a schedule. They are cheap and very over-crowded but a great way of obsorbing the local flavour. Car hire is also available but a bit expensive.

GeographyLocation: West Africa, at the mouth of River Gambia into the Atlantic Ocean (west), surrounded by Senegal. See map.
Capital: Banjul(former Bathurst)
Surface: 11.295 km2 (there of 1.300 km2 water)
Coastline: 80 km
Climate: Tropical savannah climate with a hot rainy season (June to November) and a cooler dry season (November to May).
Natural hazards: Rainfall has dropped some 30% over the last 30 years.
Regions: 1 city (Banjul) and 5 divisions: Lower River, McCarthy Island, North Bank, Upper River, Western Division.
Land use: Arable land (18%), permanent pastures (9%), forests and woodland (28%), other (45%) (1993 est.). The patterns of land use in The Gambia are related to the different vegetation zones. These again depend heavily on the fluvial influence and soil conditions, as the climatic conditions are relatively homogeneous all over the country.
Cities: The main urban agglomeration is the Kombo St. Mary area west and south of Banjul, including the suburban town of Serrekunda. The countries second town, Brikama, lies to the south but the urban zones of Serrekunda and Brikama are almost connected. Banjul, the capital situated at the mouth of River Gambia, is loosing its importance to boomtowns like Serrekunda and Brikama. Further inland, the transit towns of Kerewan and Farafenni are growing on the cost of the earlier riverine centers of Georgetown and Basse Santa Su.
Administrative Regions: For administrative purposes, the country is divided into the capital territory (seat of Government), the adjoining Kombo St. Mary area and the provinces. The provinces are in turn divided into five divisions, each headed by a commissioner, with each division further subdivided into districts locally administered by head chiefs. The five divisions are (west to east) Western, North Bank, Lower River, MacCarty Island, Upper River (see administrative map below).
Population: 1,33 million, whereof 30,4% urban. 2,5% annual increase.
Population density: 107,6 persons/km2Infrastructure:
Paved roads: 950 km
Railways: none
Car park: 18.000 (1997)
Airports: 1 international airport (paved); Yundum (outside Banjul)
Telephones: 16 pr. 1000 persons (1/1000 mobile phones)
Radio: 154 pr. 1000 persons;
Television: 3 pr. 1000 personsPeople & Population

Peoples of The Gambia: The principal principal ethnic groups are the Wollof and the Mandinka the former living mainly in the capital city of Banjul, while the latter constitute the single largest people of The Gambia. These ethnic groups are reminiscent of the former Empire of the Wollof in the Senegambian Region and the famous Mandingo Empire of Mali and Songhai. In addition there are the traditionally pastoral Fula and the traditionally trading Sarahuleys. Another people, the Akus or Creoles, have traditionally been an important segment of the local elite. Further, there are some Mauritanians, Moroccans and Lebanese, mostly traders and shopkeepers. Each people speaks its own language, but English is commonly spoken as well as being the official language of the country. Most Gambians thus speak at least two-three languages.
There has not only been harmony between the different groups, but a fusion is taking place by cultural interaction and intermarriage. Actually, most Gambians feel more in common with fellow Gambians of another ethnicity than for example Senegalese of he same ethnicity. National identity is replacing ethnical identity, making The Gambia a melting pot of West African ethnic groups.
Ethnic composition: Mandinka 42%, Fula/Fulbe 18%, Wollof 16%, Jola 10%, Serahuli 9%, other 4%, non-African 1%.
Language: English (official), Mandinka, Wollof, Fulfulde and other local languages.Demographical dataTotal population: 1.330.000 (1999 est.)
Natural increase: 2,5% annual
Population projected to 2010: 1.745.000
Population density: 118 p/km2
Population under 15 years: 46%
Population over 65 years: 2%
Urbanization: 69,6% rural and 30,4% urban
Major cities: Serrekunda 110.000 inhabitants. Kerewan 100.000 inhabitants. inhabitants. Brikama 95.000 inhabitants, Banjul 45.000 inhabitants.SocietySocial dataLife expectancy: Men 52 years, women 57 years (1999 est.).
Infant mortality: 75,3/1.000 born (1999 est.).
Adult alphabetization rate: 33%
Medical services: 0.09 doctors each 1.000 inhabitants.
Pupil malnutrition rate: 41%
Access to potable water: 69%
Education expenditures: 11 mil. US$ (3% of GDP)
Military expenditures: 15 mil US$ (4% of GDP)

Religious data
The population is predominantly Muslim with more than 90% following Islam. The remaining 10% are mostly Christians of different denominations including Anglicans, Methodists, and Roman Catholics. The majority of Gambians are strict in their religious practices. There is, however, no fanaticism and amity prevails between religious and ethnic groups.
Data: Muslim 80,0%, African religions 11,2%, Christians 7,8%.Women
Domestic violence, including abuse, occasionally is reported, and its occurrence is believed to be fairly common. Police tend to consider these incidents to be domestic issues outside of their ordinary jurisdiction. Rape and assault are crimes under the law. The law does not differentiate between married and unmarried women in this regard. Laws generally are enforced. Neither sexual harassment nor de facto sexual discrimination are believed to be widespread.
Traditional views of women's roles result in extensive societal discrimination in education and employment. Families frequently educate male children before female children. Females constitute about 40 percent of primary school students and roughly 1/3 of high school students. Employment in the formal sector is open to women at the same salary rates as men. No statutory discrimination exists in other kinds of employment; however, women generally are employed in endeavors such as food vending or subsistence farming. The regime of Yahya Jammeh is said to have done much for women's participation in public and political life, and appointed women to several key posts on its seizure of power.
Shari'a law usually is applied in divorce and inheritance matters for the Muslim majority. Women normally receive a lower proportion of assets distributed through inheritance than do male relatives. Marriages often are arranged and, depending on the ethnic group, polygamy is practiced. Women in polygamous unions have property and other rights arising from the marriage. They have the option to divorce, but not a legal right to approve or be notified in advance of subsequent marriages.
Active women's rights groups exist, which are focused primarily on economic issues and the elimination of female genital mutilation (FGM). FGM is widespread, especially in the countryside. In the central areas, it is loosing ground, and religious leaders have been clear in pronouncing that FGM is not part of Muslim liturgy.